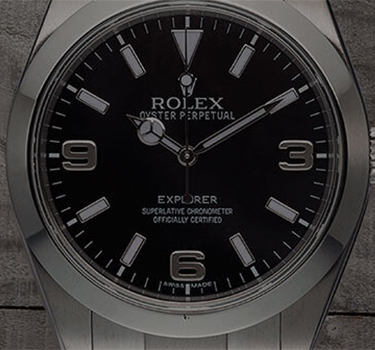 Scaling heights since 1953, the Rolex Explorer collection originated after years of collaborating and experimenting with some of the world’s most fearless explorers and scientists on some of the most historic expeditions to date. Rolex’s involvement in exploration started in the 1930s when they first began equipping major expeditions with watches to test in the toughest conditions – one of the most notable expeditions being the first ascent of Mount Everest in 1953. Later that same year, the original Explorer watch was officially launched as an emblem of Rolex’s close ties and deep support of exploration. It was famously tested during the Himalayan expeditions, earning it its reputation as the most durable of the brand’s Oyster family. Both the Explorer and Explorer II, which was later launched in 1971, have since proven time and time again to withstand some of the harshest climates and conditions – making them the ultimate watch of choice for adventure and exploration.

The Explorer II ref. 1655 is a notable model of the collection. The 1655 was specifically created for a very narrow targeted market of cave explorers, as its sole purpose was to differentiate between daytime and nighttime in places where lighting can be confusing – such as when cave exploring. Launched in 1971, this classic model was kept in production until 1984. It’s most unique design feature is its 24-hour hand in the shape of a big prominent orange arrow – which gives it a cool and striking presence on the wrist. As such, this particular model was nicknamed the “Steve McQueen” after the American actor who himself was nicknamed the “King of Cool”. The Explorer II ref. 1655 perfectly embodies Rolex’s unparalleled ability to fuse ruggedness with enduring design and was famously photographed on renowned and legendary explorers like Jean Francois Pernette and Reinhold Messner.

The classic yet sporty appeal of the Explorer and Explorer II has proven popular with several celebrities – both past and current. Actors like Tom Hanks, Matt Damon, Jason Statham, and Orlando Bloom have all been seen wearing models of the Explorer and Explorer II, including the aforementioned Steve McQueen model. Prince Harry, Duke of Sussex, has also been frequently seen wearing a white-dial Explorer II ref. 16570 – particularly throughout his service as Captain in the British Army. Ian Fleming, the British writer and journalist best known for writing the James Bond series, not only wrote his James Bond character to frequently sport a Rolex, he himself wore a stainless steel Rolex Explorer 1016 which he likely based James Bond’s watch on.

The Rolex Explorer has a unique streamline appearance made with classic Oystersteel, a smooth bezel, Oyster bracelet, a black dial with luminescent hands and hour markers for optimal legibility in all lighting. The Explorer 214270 has a 39mm case as do all current-production Explorers, whereas the original Explorer and other vintage models have a 36mm case. The Explorer II design is significantly more advanced – equipped with a cyclops lens date window, crown guards, a fixed bezel with 24-hour graduations, as well as a bright orange 24-hour indicator on the dial. Explorer IIs are also much more robust than their predecessors with a larger case size and a maxi dial with larger hands and lume plots to balance out its overall larger appeal. Modern Explorer IIs have a 42mm case while the vintage models have a 40mm size.  Of the current-production models, the Explorer 214270 is equipped with the calibre 3132 movement and the Explorer II 216570 come with the calibre 3187 movement – both self-winding mechanical movements that offer increased resistance to shocks and extreme conditions and high precision and reliability.

FAQs about the Explorer

Q: How much is a Rolex Explorer II?

A: The modern Rolex Explorer IIs on the Rolex website, the ref. 216570, is priced at $8,350 retail. In the secondary market, pre-owned watches of this model are priced between $10,495-$12,495. The Explorer 214270 has a retail price of $6,550 and are going for between $7,195 – $7,595 for pre-owned watches in the secondary market. As the Explorer collection is considerably one of Rolex’s most understated sports watches, its demand among watch collectors and enthusiasts causing them to sell for more than their retail price is rather impressive.

Q: How to use the Rolex Explorer II

A: To use the Explorer II like a GMT watch, you can use the 24-hour indicator/hand and the fixed bezel with its 24-hour graduation to read the time of a second time zone while using the regular hour and minute hands to read the local time.

You can also use the Explorer II as a compass. Simply point the regular hour hand at the sun. If the 24-hour hand is set correctly to your local time zone, it will point towards North. Keep in mind – this will only work in the North Hemisphere and only when Daylight Savings Time is not in effect. This method can still work when it is not Daylight Savings Time, except when pointing the regular hour hand to the sun, you would instead look for the midway point between the hour hand and the 12 o’clock position to know which way is South. If in the Southern hemisphere, you would point the 12 o’clock marker towards the sun and look for the midpoint between 12 o’clock and the current hour to know which way points North.

Q: How to set a Rolex Explorer II