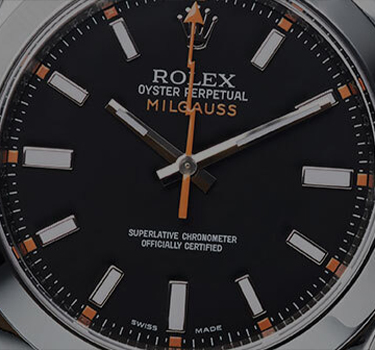 Discover our collection of Rolex Watches

The first Oyster Perpetual Milgauss was launched in 1956. The 1950s were a time marked by technological and scientific developments exposing more engineers and technicians to magnetic fields in their working environment, which interfered with the functioning of their watches. Rolex created the Milgauss watch collection as a response to this problem. Using a magnetic shield set inside of its Oyster case to protect its movement, the Milgauss watch was designed to withstand impact of up to 1,000 gauss – hence its name, “mille” (French for one thousand) gauss. Although the Milgauss has only gone through only three different models (ref. 6541, ref. 1019, and ref. 116400), it underwent several configuration changes before its production was discontinued in 1988.

A notable reference is the  Rolex Milgauss “Z-Blue” ref. 116400GV. With a sleek stainless-steel case, smooth bezel, and Oyster bracelet, this watch speaks to the classic look of the Milgauss collection. The most eye-catching feature is its stunning “Z-Blue” dial that is perfectly complemented by a green sapphire crystal, which is hard to miss with a 40mm case – making this watch just as striking on the wrist as its distinct lightning bolt shaped seconds hand. Powered by the self-winding 3131 caliber, the Milgauss Z-Blue has a 48-hour power reserve and is waterproof for up to 100 meters in depth.

The Rolex Milgauss was first designed to meet the demands of scientists and engineers. It blends its scientific heritage and anti-magnetic characteristics with unique aesthetics, making it the first watch of its kind. Aesthetically, its most distinct feature is its bright orange seconds hand in the shape of a lightning bolt, complemented by the orange accents around the rim of the dial by each hour marker. Another trademark feature of the Milgauss is the tinted green sapphire crystal that is exclusive to the collection. The modern Milgauss watches, ref. 116400 and 116400GV, are made with Oystersteel, have a 40mm case and Oyster bracelet for a very streamline yet characteristic look. Equipped with the caliber 3131, a mechanical automatic movement that isn’t used in many watches – only the Milgauss 116400 and Air-King 116900, the modern Milgauss has a power reserve of 48 hours, impeccable precision, and increased resistance against shocks and magnetic fields.

The Rolex Milgauss has been spotted on the wrists of celebrities including actors David Craig, Jennifer Aniston, Ashton Kutcher, Tom Hanks and Jonah Hill, as well as musical sensation Usher, and NFL legend Tom Brady.

FAQs about the Milgauss

A: The Rolex Milgauss has a guaranteed water resistance of up to 100 meters (330 feet) as long as the crown is securely and completely screwed down against the watch’s case.

Q: What is a Rolex Milgauss?

A: The Rolex Milgauss is a watch first designed by the brand with the needs and demands of scientists and engineers in mind. It was first introduced in 1967 and was in production until 1988. Its most notable feature is its anti-magnetic components on account of its internal magnetic shield – withstanding interference of up to 1,000 gauss.

Q: How much is a new Rolex Milgauss?