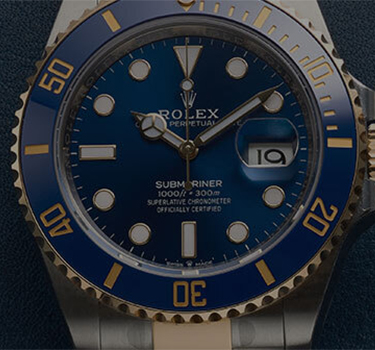 The launching of the Submariner in 1953 marked the beginning of an enduring classic and favorite in the Rolex watch family. The Submariner collection is one of the more popular from the top-tier brand. The Submariner set the standard and paved the way for other Rolex watches to follow like the Sea Dweller and the Deepsea, although it is by far the brand’s most famous diving watch – appropriately coined “the reference among divers’ watches”.

As suggested by its name, the Submariner was originally created and specifically geared for the purpose of underwater diving and exploring. Characteristic features, such as its water resistance, durability, and overall performance have continued to evolve and improve over the years. When the Submariner first emerged, its diving depth capability of 100 meters took the diving world by storm. Since then, it has tripled its maximum diving depth to a remarkable 300 meters. The Submariner Date models feature a magnified “cyclops” date window that lets wearers know the current date. The Submariner was also the first Rolex model to be fitted with a crown guard, an improvement exclusive to the brand that added to the watch’s protection and ruggedness and made it that much more waterproof and shockproof than its predecessors.

FAQs about the Submariner

Q:  How much is a Rolex Submariner?

That being said, market prices for Submariners can also range quite a bit and differ significantly from the retail price. For example, the Submariner 11610LN can range from the official price of $8513 to its retail price at $12,180. Depending on watch exclusivity, market prices can even go well above retail. For example, the Submariner 11610LV “Hulk” is priced at $9060 retail, but due to its rarity,  it can cost up to $16,000 nowadays to find one in the market. Vintage Submariners can have a big price variation as well, with the older and more exclusive models costing the most – like the Submariner 5513, which is priced at around $17,300.

Q:  How to tell if a Rolex Submariner is real?

A:  Rolex is one of the most counterfeited watch brands and products in the luxury world. As such, it’s absolutely essential to be confident you’re purchasing from a trusted and reliable source when buying any Rolex, especially a pre-owned watch. Knowing some basic pointers of how to spot a fake Rolex will also come in handy when in the market for a pre-owned Rolex watch.

Q: How to wind a Rolex Submariner?

A: To manually wind a Rolex Submariner, you will first need to completely unscrew the winding crown and then turn it several times – clockwise direction. You will need to turn it a minimum of 25 times for adequate partial winding.  After that, the watch will then automatically wind whenever it is worn on the wrist.