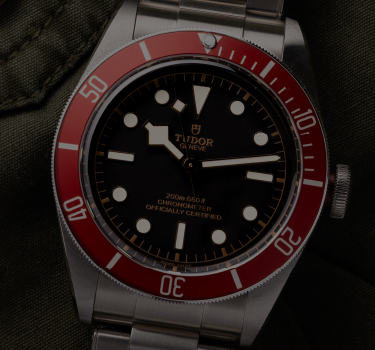 Once upon a time, luxury watchmakers, Tudor were best known simply as a subsidiary company of gargantuan brand, Rolex. In existence since the 1920s, the company was formed specifically to be a lower cost alternative; in many cases sharing most of the components of the full-blooded Rolex product, but powered by a third party movement, rather than one built in-house.

That difference between having a caliber designed and created by the same manufacturer responsible for the rest of the watch, versus one bought in from an outside concern gave buyers an added value proposition, regardless of how much significance it held in the real world. And that perception of additional quality was reflected very much in the prices charged by the two marques.

However, the gap between them has now shrunk to its lowest level ever. Tudor’s watches were always built with the same fastidiousness and attention to engineering excellence as Rolex’s. Now though, many of them are also driven by Tudor’s own movements, with the brand recently branching out into becoming a fully fledged manufacture. Yet, happily, we can still look to the company to offer some of the best bang-for-your-buck timepieces in the industry.

What’s more, it is Tudor which has arguably given us the most successful collection of vintage-inspired models of any of the big players. They have managed to draw on their own history of robust tool watches and sympathetically update them to appeal to a new generation with an eye for the nostalgic. A top drawer watchmaker enjoying something of a modern golden age, Tudor has stepped out of the shadows and is today basking in the sun at last.

Tudor was far from Rolex founder, Hans Wilsdorf’s first attempt at starting an ancillary company to produce lower cost watches. As early as 1909, just four years after establishing Wilsdorf & Davis (the fledgling enterprise which would go on to become Rolex) the genius marketer spotted the gap in the market for a watch with many of the same qualities as his premium product, but one which was considerably easier on the pocket.

In fact, his list of abortive attempts is a long one. In short order, Wilsdorf registered and quickly abandoned the company names; Omigra, Falcon, Genex, Lexis, Hofex, Rolexis, Rolwatco, Marconi, Unicorn, Rolco and the Oyster Watch Co. among others.

While all followed the same business plan that Tudor would eventually adopt—ostensibly a Rolex watch powered by a non-Rolex caliber—they were all also hampered by the same marketing misstep.

From the outset Wilsdorf knew the power of exclusivity, and that part of the appeal of his Rolex watches was, ironically, their high price. Buying one then, as it is now, was part investment and part personal reward to mark a major life achievement.

To preserve that mystique, he insisted that any other trade names be kept separate from his top-of-the-line models, and so he barred the watches made by these secondary companies from being sold through Rolex dealers. However, it was no secret that these far cheaper models were basically the same as the much more expensive pieces, bar the movements. And as the wristwatch market was practically brand new at this point, no one really cared about the movements. As a result, the cut price watches started to outsell the full price ones by huge amounts.

So when he hit on the Tudor brand in 1926, Wilsdorf leant into the development by allowing them to be sold through his dealer network. These too massively outperformed the Rolex models and so, in 1946, Wilsdorf cut the new manufacturer loose and registered the firm as Montres Tudor S.A., a joint stock business with Rolex owning all the shares. Once freed up to go their own way, Tudor thrived.

The first products introduced shadowed the Rolex watches closely, starting with the Tudor Oyster collection, manually winding but built around the waterproof casing Wilsdorf had developed in the ‘20s. A couple of years later, the Tudor Prince series emerged, with the ‘Prince’ name designating the presence of a self-winding caliber, the equivalent of Rolex’s ‘Perpetual’ movements.

But their biggest success story to date came along in 1954, with the arrival of the Tudor Oyster Prince Submariner ref. 7922, a dive watch developed with the input of the French Navy and practically a carbon copy of the legendary Rolex Submariner released just a year previously.

That would be the start of Tudor’s long and prosperous relationship with many global fighting forces, including the U.S. and U.K. navies.

Tudor in the Modern Age

Throughout the rest of the 20th century, Tudor continued to add more models to its lineup to great acclaim. On their 50th anniversary in 1996, the brand replaced all of its Rolex-signed components—crowns, cases and bracelets—with new ones bearing their own logo.

However, the stigma of ‘the poor man’s Rolex’ still haunted the brand and business began to take a hit. So much so, in fact, that Tudor were forced to stop selling in America and Britain for several years.

But with the trend for all things vintage taking flight in the early 2000s, Tudor were back. By scouring the archives for the best of their past successes, the manufacture has brought out several world beating collections of retro reissues. Most notable of them all continues to be the Tudor Black Bay range, a series of stripped back tool watches which includes simple three-handers, chronographs and GMTs which could have been lifted straight out of the 1950s but with modern day touches where it counts.

Additionally, their Pelagos models are the embodiment of the contemporary diver and their Glamour and Style ranges contain some of the best value for money dress pieces in the industry.

Now with their own identity firmly established in the watch-buying public’s psyche, Tudor continue to go from strength to strength, and with a legion of passionate fans behind them.

The Tudor catalog is a wide and varied one, intelligently thought out to include something for everyone:

Black Bay: The perfect all-day-everyday watch, the Black Bay is easily Tudor’s most popular line, with some classic design cues and plenty of options

Black Bay Date: As with the standard Black Bay series, but with an added date display at the three o’clock and with several two-tone examples included

Black Bay Fifty-Eight: As vintage-inspired as you can get, the Fifty-Eight range has been a sales phenomenon, with a 39mm case, a host of retro details and all now powered by in-house calibers

Black Bay 32/36/41: A clean, simple, field-type watch, this is Tudor’s parallel to the Rolex Explorer

Black Bay P01: A real oddity, based on a 1967 Tudor prototype which never saw the light of day, the P01 features a unique bezel locking mechanism and a winding crown placed unusually at the 4 o’clock

Black Bay Chrono: an absolute triumph of a chronograph, one to rival a certain Daytona but at less than half the price. 41mm, with an in-house caliber and a range of colorways. An unbeatable bargain

Black Bay GMT: will look uncannily familiar to anyone acquainted with the very early Rolex GMT-Master references. Tudor have brought us their very own Pepsi

Tudor Royal: Tudor’s take on the luxury sports watch, the Royal is available in four sizes, each with a distinctive integrated bracelet and engine-turned bezel

Heritage Chrono: a multicolored chronograph based on the famous ref. 7169 ‘Monte Carlo’ from the 1970s

Pelagos: a thoroughly modern dive watch, forged from titanium and with ceramic bezels, the Pelagos series is available in black or blue

Pelagos LHD: another well-thought out rarity; this version of Tudor’s class-leading diver has its crown on the left, for southpaws who wear their watches on their right wrist

Pelagos FXD: a special addition to the Pelagos range, the FXD was built in conjunction with the Marine Nationale (French Navy) and features fixed lugs and a bezel with a full minute track

1926: The ideal unisex wear, the 1926 is modest and unpretentious, offered in more than 100 different size, dial, bracelet and hour marker configurations

Style: beautifully straightforward time and date models, the Style range covers just about every taste in one collection

Glamour Date: Tudor’s most expansive range, with an even greater assortment of options than the Style, take your pick from three sizes and a whole host of different dial choices

Glamour Date+Day: with a clear nod to the Rolex Presidential, the Glamour Date+Day is a range of sporty dress watches with a genuinely useful double calendar complication

How much is a Tudor Watch?

The underlying mission Hans Wilsdorf laid out for his auxiliary brand—to offer a watch of comparable quality to a Rolex but for less money—still holds true with Tudor today, 100-years down the line.

Not only is their collection absolutely first rate, it is flawlessly engineered,  highly varied and a fraction of the price of those offered by their bigger brother. Crucially, it is also far more accessible than Rolex’s. There is none of the scarcity of models due to an artificially restricted supply, so buying a watch from an Authorized Dealer should hold few problems.

Other than that anomaly however, in essence, Tudor’s pricing stops where Rolex’s begins. There is very little in the catalog which costs more than $5,000, even for watches like the Black Bay GMT or the Chrono, both massively sought after pieces. The Heritage Advisor, with its charming alarm function, just tips over the five grand mark, but not by much. You will probably be able to secure one for around $5,600.

But what about on the preowned market? Because of the ease of buying through Tudor’s own dealer network, prices for preowned examples are slightly cheaper, for ‘as new’ models.

Interestingly though, and evidence of just how well Tudor is now doing as a brand, their vintage watches have begun to perform extremely well. While they may not appreciate quite like some of Rolex’s most significant references, they are certainly catching up. Many of the oldest Tudor Submariners are now starting to command incredible sums, such as early versions of the original ref. 7922, which can easily break into six-figure territory and are only expected to get higher as time goes on.

If you were in the market for a classic Tudor, it would be better to get in sooner rather than later.

Tudor have carried on with the idea of brand ambassadors invented by Wilsdorf in the early years of the 20th century. Their recent ‘Born to Dare’ campaign enlisted some of the most famous celebrities in the world to represent the brand, and they have been joined over the years by other eminent personalities who appreciate fine watchmaking.

Below is a list of some high profile Tudor wearers: