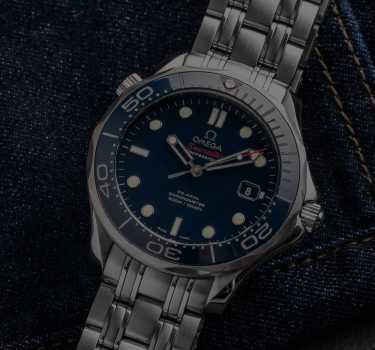 Omega is one of the biggest names in luxury watches. Its roots stem back to 1848, when a young and passionate watchmaker, Louis Brandt, opened a small workshop in La Chaux de Fonds, Switzerland – making and selling watches to customers all around the world. When Brandt passed away in 1979, his two sons carried on their father’s vision and business, setting new groundbreaking standards in watchmaking history. The release of the 19-line Omega Calibre in 1894 revolutionized watchmaking and became the company’s namesake. In 1932, Omega became the official timekeeper of the Olympic Games in Los Angeles, CA – a partnership that continues on to this day. Omega has also played a significant role in space travel, as the Omega Speedmaster was the first watch to enter space in 1962 on the wrist of astronaut, Wally Schirra, and again in 1979 on the wrist of Buzz Aldrin during the first trip to the moon. A year later, the Omega Speedmaster played an integral role in helping the Apollo 13 mission return safely home. To this day, Omega continues to collaborate with space programs around the world to create some of the most effective tools in space exploration.

In the Omega watch family are the Constellation, Seamaster, Speedmaster, and De Ville collections. Of these collections, perhaps the most widely known is the Speedmaster collection, which earned the AKA of “the Moonwatch” when Buzz Aldrin famously landed on the moon wearing one. The Seamaster is another popular collection by Omega, with an impressive selection of exceptionally built, robust, and versatile diving watches.

The company which would go on to become Omega was established in 1848 in La Chaux-de-Fonds, situated in the canton of Neuchâtel, Switzerland—a town built by, and for, the watchmaking industry. Founded by the 23-year old Louis Brandt and originally called La Generale Watch Co., the young horologist started out assembling precision pocket watches, sourcing the components from local Swiss suppliers and selling the end product all over Europe.

When Louis passed away in 1879, both of his sons, Louis-Paul and César, took over the business, and the manufacture moved to larger premises in Bienne, in the canton of Bern.

It was this new generation which was to drive the business forward, developing a revolutionary system which gave complete control over the entire production process and allowed for watch parts to be used interchangeably.

Using this arrangement, the company was able to produce a cutting-edge new movement, called the OMEGA caliber, which not only earned the enterprise many plaudits but led to La Generale Watch Co. spinning the Omega brand off into its own company in 1903, named Louis Brandt et Frère—Omega Watch & Co.

Set out on its own, Omega quickly became one of the biggest watch manufacturers in the world, producing upwards of 100,000 pieces a year. Further triumphs would follow, as the need for evermore precise timing of sporting events became a necessity.

In 1932, Omega was announced as official timekeeper of the Los Angeles Olympic Games, a role it would perform frequently until it was awarded the exclusive contract in 2009.

But more significantly than that is the brand’s relationship with the American Space Program. In 1963, the Omega Speedmaster, released six years earlier as part of their Professional Collection, was the only chronograph from any watchmaker able to withstand the grueling battery of tests dreamt up by NASA, and became the certified flight-ready timepiece for all space flights. In 1969, it was the first watch to experience the lunar surface, strapped to Buzz Aldrin’s arm. There has been a Moonwatch in the collection ever since.

Most recently, Omega can bask in the knowledge that it was the only company with the foresight to recognize the genius of George Daniels’ Co-Axial escapement, lauded as the most significant advance in mechanical watchmaking in 100-years. It has been used to form the backbone of one of the industry’s most exciting and technologically advanced collections of the modern aged, a stunning mix of the avant-garde and vintage inspired.

Today, Omega stands as a genuine rival to the Swiss behemoth that is Rolex, the two locked in a seemingly unending battle of one-upmanship.

The Omega collection is split into four main groups, with each one having several subdivisions: Seamaster, Speedmaster, Constellation, and De Ville collection.

The Aqua Terra 150M : The Aqua Terra 150M is an extensive series of watches, encompassing everything from petite ladies quartz models through to impressive GMT Worldtimers. In between, you will find a wide selection of handsome three-handers in a variety of styles, colors, and metals. While not technically dive watches, they are, as the name suggests, all water resistant to 150m.

The Seamaster Diver 300M: The model which brought Omega back into focus with a new generation of consumer. In 1993 it became the watch of the new James Bond when Pierce Brosnan donned his blue dialed and bezeled model in Goldeneye. Since then, the range has been expanded and improved upon and is now Omega’s most popular line.

The 50+ strong collection contains simple time-and-date models, along with a number of chronographs and GMTs, all with homegrown co-axial movements and in a range of sizes and metals. As true divers, every watch is outfitted with a helium escape valve, a rotating bezel and are safe down to 300m.

The Seamaster Planet Ocean 600M: An uprated, more hardcore diver, the Planet Ocean series arrived in 2005 and soon became a firm favorite among fans who craved a bit more watch for their money.

Big, bold, and capable, the Planet Ocean is where you’ll find cutting-edge materials such as ceramic cases and Liquidmetal™, a combination of metal and ceramic to produce practically indestructible bezels.

What’s more, every one of the Planet Ocean models is powered by a Master Chronometer caliber, designating them as both accurate to within 0/+5 seconds a day as well as resistant to magnetic forces of a staggering 15,000 gauss.

The Seamaster Heritage Models: Omega’s Seamaster Heritage collection contains a wide and disparate assembly of watches. From nostalgic reimaginings of the Railmaster and Seamaster 300 (the original dive watch from 1957) to oddities such as the Bullhead chronograph and the extraordinary PloProf, a 55mm monster waterproof to 4,000ft.

The Moonwatch: If any watch has ever earned that overused sobriquet ‘iconic’ it’s this one. The outward design has barely altered from the model worn by Buzz Aldrin during his moonwalk, and even the movement is only a gentle evolution away from the original. Now available in a range of metals and colors, each is unmistakably the one and only ‘Speedy’

The Speedmaster Heritage Models: A whole collection of beautifully recreated classics from the Speedmaster’s illustrious past. Taking vintage-inspired to new heights, there is even a version featuring the Caliber 321, the actual movement which powered the first watch on the moon

The Speedmaster Dark Side of the Moon: The DSOTM collection is to the Speedmaster what the Planet Ocean is to the Seamaster. Physically imposing and crammed with revolutionary materials and tech, this is the Speedy for a new wave.

The Speedmaster 38: A scaled-back, unisex collection, the ‘38’ has a softer, more opulent overall feel embellished with plenty of precious metals and gemstones

The Speedmaster Two Counters: Before it was the Moonwatch, the Speedmaster was simply a great chronograph destined for the racetrack. This is a range showcasing that side of the world’s most famous stopwatch, with plenty of eye-catching color.

The Constellation: An enormous collection of men’s and ladies models, the Constellation features some dazzling dress watches in steel, pure gold and two-tone. A variety of styles which all follow familiar design cues, this is Omega at its most elegant.

The Globemaster: Sophisticated watches for all occasions, the Globemasters are the everyday watches of the Omega catalog. Minimalist styling, each has a beautiful pie-pan dial for that retro chic

The Ladymatic: Tasteful, round cased 34mm ladies watches in a range of refined styles

The Hour Vision: A dozen luxurious dress watches, each is driven by a Master Chronometer movement and, like the Globemaster, has a pie-pan dial

The Trésor: An exquisite range of models for women, all with classically thin cases and powered by either quartz or Master Chronometer calibers

The Prestige: An enormous collection of over 200 men’s models, the De Ville Prestige range is epitomized by pure lines and timeless design

The Tourbillon: The first manual-winding central tourbillon watches to gain Master Chronometer status, these are among Omega’s most technically impressive, and expensive, statement pieces

How Much Is An Omega Watch?

With such a vast number of watches in their portfolio, the price of an Omega is obviously hugely varied.

The entry level pieces, if we discount the quartz models for the time being, are found in the De Ville collection, with the Co-Axial-powered Prestige range starting at a little under $4,000.

Interestingly, if you wanted to spend significantly more than that, you don’t need to stray from the range. The De Ville Tourbillon, the most expensive model currently made by Omega, sells for around $258,000.

As for vintage Omegas, while they might not command the same level of incredible pricing as some Rolexes or Pateks, they are definitely increasing in value with each passing year.  Very early examples of the Speedmaster or Seamaster 300 can easily crack six figures.

Below, we have selected a few of the brand’s most popular models to give you an overview of their official retail price versus what you could pay on the preowned market.

And, from the world of fiction: Al Pacino as Tony Montana in Scarface and, of course, Pierce Brosnan and Daniel Craig as James Bond.